1- I first went nuts for Ingmar Bergman when I was 15. I saw everything I could.  So many of the only viewings of his stuff date from then.  I was dazzled but had no idea what I was watching in many cases. Watching Winter Light again is a beautiful reminder of how works of genius are always there for you at every stage of your life, giving what you need at the time.  I had never seen Summer With Monika and it impressed me mightily. It seems to sow the seeds of so many of Bergman’s later dysfunctional couples.  It was interesting to sense a trace of Neo-realism running through the film.

2- How many times will I have to force myself to watch Vampyr before I admit it bores me to tears?

3-Douglas Sirk continues to be a revelation. There’s Always Tomorrow is almost like All That Heaven Allows writ small, but more devastating.  ‘

4- I watched Blue Jasmine absolutely drop-jawed. Could it be as bad as it seemed? More on this later, maybe.  I don’t like venting spleen here.

TV Guide used to have a capsule synopsis of the movies being shown, along with cast information and running time. Next to the title there would be a one-word label giving the genre of the film.  The majority were simply labeled  ‘Drama’.  The rest were categorized as ‘Comedy’, ‘Western’ or ‘Musical’.  What I always sought out, though, were the movies labeled ‘Melodrama’.   ‘Melodrama’ was used to describe what is now referred to as horror or monster movies.  I cherish this nomenclature because it differentiates this class of film from what is currently referred to as ‘Horror’.  The term  ‘Horror’ seems to be contemporary description, probably a post-Psycho  creation, used to refer to films that are out to terrify the audience, mostly with depictions of sudden violence.  This isn’t what I was looking for when poring over TV Guide

The genre of the ‘melodrama’ type of horror film is all but extinct. Every once in a while a film like ‘The Woman in Black’ by James Watkins or ‘The Others’ by Alejandro Amenábar somehow gets made.  For the most part, though, this niche is now being filled by either the murder/torture film in which the uncanny has been replaced by gore,  or by the ‘teenage horror romance’ film,  in which the subliminal sexuality of the early genre is now replaced by a more overt hormonal response.

Like much of early film, the ‘melodrama’ type of horror was rooted in the Victorian sensibility.  Nowadays, the first thing we look for in something labeled ‘Victorian’ is a subtextualized sexuality, and these films had that in spades.  However, what these films sublimated the sexuality with was a high sense of Romance and this is achieved in several ways.

Time – These films are typically set in the 19th Century, which is the heyday of the Gothic Novel .  The remoteness of this time puts the horror at a safe remove from the audience.  Contrast this to the immediacy of the ‘horror’ of something like Saw – immediate because every reference is contemporary.  It could be happening to you.  Being trapped in a Transylvanian castle by a vampire is less likely to happen to someone today. The ‘horror’ of that situation is remote because the time is remote, and the remoteness of the time allows the audience to view the proceedings with a romantic sense of nostalgia.

Place – The classic American ‘horror’ film is most often set in central Europe, in non-specific countries tinged with Slavic and Gypsy touches.  For the American audience, setting something in Europe instantly lent it a cachet of romance.   Even Dracula begins deep in Mitteleuropa, then the terror migrates west to ‘modern’ England.  By doing this, Dracula brings the romance of place with him.

The types of monsters associated with this genre of film also have their particular terrors couched in romance.

The Vampire needs his victim’s blood to perpetuate his immortality.   Rather than simply drain the blood and leave the victim dead, the victim, usually of the opposite sex, comes under the thrall of the vampire and after the deed she is on her way to becoming like her tormentor.  It is in many ways the inverse of a marriage, but perhaps even more binding. 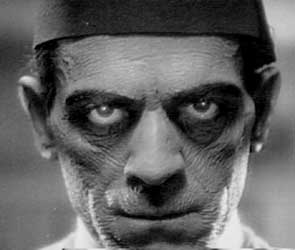 The Mummy is the most overtly romantic of the monsters.  He has survived for millennia and once he is awakened, his one purpose is to regain his great love, who has reappeared to him in the shape of a contemporary woman. 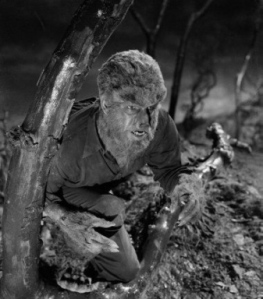 Werewolves often are the most upstanding citizens in a community, whose superego is periodically ripped away by that most romantic of things, the full moon.

This particular genre of horror films reached a high point in the magnificent movies of producer Val Lewton.  Given $100,000 per film and a ghastly title like Curse of the Cat People,  Lewton  was charged by the RKO studios chiefs to make films to rival what was coming out of Universal  (Frankenstein, Dracula, The Invisible Man, etc.)   Because these were such low-budget affairs and low-risk to the studio, Lewton was left alone.  This freedom allowed him and his team to create some of the most powerful, romance-tinged of ‘horror’ films.  For example, given the title I Walked With A Zombie, Lewton created a haunting Jane Eyre-inspired story, transported from the moors of England to the plantations of the Caribbean, replete with Voodoo and forbidden love. 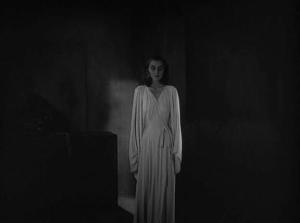 The tide turned for these films with Psycho.  Once Marion Crane was stabbed in the shower, naked and in full view of the camera, something else was killed.  The notion of romance associated with the genre began to die a slow death.   Studios like England’s Hammer Film still turned out amazingly literate versions of the old standby monsters, but by the Sixties the blood and sex quotient seems to overtake the romance quotient.  I do love Hammer and I adore Psycho (which I find to be actually sardonically hilarious).  But for a good taste of what I am talking about, I recommend watching one or all of the following: