German director Rainer Werner Fassbinder was amazingly prolific – over 40 features and shorts in just 13 years. Between 1979 and 1982 he wrote and directed three films which are probably his masterpieces.  Collectively, they are known as the BRD (Bundesrepublik Deutschland) Trilogy: The Marriage of Maria Braun, Lola  and Veronika Voss. At the same time he also produced a gigantic 14-part television series based on the novel Berlin Alexanderplatz, as well as two other features.  As I said, amazingly prolific.

The films differ greatly in style, but they have much in common.  They are all set in 1950s Germany during the time of the Wirtschaftswunder (the economic miracle), which saw Germany change from a defeated, humiliated country into a financial and political powerhouse.  They all center on three extraordinary female characters who are interesting in themselves, but also are fascinating in how they become symbols of what Germany was going through.  They all also demonstrate a profound love of Hollywood films of the 1950s, especially the works of Douglas Sirk.

The Marriage of Maria Braun

Arguably the most celebrated of the three films, this was the film that turn Fassbinder from an interesting, quirky local German filmmaker into an internationally acclaimed artist. The story begins toward the end of WWII.  Maria Braun’s husband Hermann has gone off to war and is presumed killed.  As the war ends, Maria’s keen sense of self-preservation leads her into a relationship with an industrialist that teaches her to become a powerful businesswoman. The problem is that Maria is losing her soul in the process.  Much like Germany of the time. What motivates Maria and keeps her moving forward is the hope that Hermann will return.  He represents all that was kind and human and loving from before, and which Maria has suppressed in her ascent.  Much like Germany of the time. The result of her reunion with the idealized husband shows Fassbinder’s most devastating critique of what Germany had become. Romantic from the past, bloodless and mercenary in the present.

In the title role, Hanna Schygulla gives an iconic, endlessly interesting performance.  She was part of Fassbinder’s troupe and he casts her here to supreme effect. 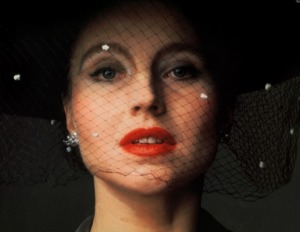 Undeniably evoking the title character of The Blue Angel, Lola also tells the story of seductive, dangerous woman.  However, unlike the character played by Marlene Dietrich, this Lola is clearly depicted as not being motivate by sexual thrall over men, but by a clear-eyed need to be financially independent. Much like Germany of the time. Played by Barbara Sukowa, Fassbinder’s star of the epic Berlin Alexanderplatz, this Lola, a high-class prostitute and sometime (awful) singer in a local bordello-cum-nightclub, seems to be on a moral collision course when a new government building inspector arrives in town, determined to clean up the corruption that has led to its economic boom. This kind and gentle, Ming dynasty loving man, played heartbreakingly by Armin Mueller-Stahl, seems to evoke the character played by Emil Jannings in The Blue Angel.  But what Fassbinder has in store for both of them is quite different and quite consonant with his socialist critique of postwar Germany and the effect that rampant capitalism has on it.The echoes of Sirk, especially in the lighting and in the subversive undermining of all that the 50s held dear are yet another level of pleasure to be derived from this rich film.

Taking his cue from the noirish atmosphere of Sunset Boulevard, Veronika Voss tells the story of how a faded film star of the Nazi era who tumbles into the life of a simple sportswriter, and how both there fates are altered not, alas, for the good. The inspiration comes from the legend of UFA star Sybille Schmitz who committed suicide in 1955 under very mysterious circumstances. She may or may not have been Goebbel’s lover. Fassbinder fleshes out this story using it to  continue his exploration of the moral cost of postwar Germany’s denial of and romance for the past.   As played by Rosel Zech, Veronika Voss is evocative of the vampiric Norma Desmond with the sportswriter standing in as a poor man’s version of the William Holden gigolo from the same film.  But she is much more than that.  As the plot unravels, we come to understand that Veronika Voss’s situation might very well be a result of not looking squarely at what happened during the war and, even worse, making it the stuff of a private fairy tale.   Rosel Zech is tremendous.

Apparently Fassbinder was at work writing a fourth film in this series, when he died at the age of 37.  It was to be a film on the life of Rosa Luxemburg and it was to have starred Jane Fonda.   Imagine!

In any event, we do have these three remarkable films which act as supreme history lessons and lessons in supreme filmmaking.

Please try them and let me know what you think!

1- It was interesting to watch Lancelot du Lac and Les Dames du Bois de Boulogne so close to each other. Lancelot du Lac is a prime example of what we expect from a Bresson film.  It is an austere (very austere) telling of the Arthurian legend of adultery. I found it extremely moving in its depiction of an ideal world devolving into nothingness.  Les Dames du Bois de Boulogne, on the other hand, is very atypical Bresson.  His second feature, made from a script by Jean Cocteau, has more of the sensibility of that writer-filmmaker’s work than of the ‘Catholic Atheist’ Bresson we have come to know and perhaps love.  What is so interesting to me is that all the criticism and articles I found concerning Les Dames du Bois de Boulogne has the writers twisting themselves into pretzels trying to prove that this film has all the elements of his later, more ‘Bressonian’ films.  It doesn’t really.  What we have here is the theory of the auteur exercising its tyranny over any thinking about film.  I suppose I am guilty of it too, since I always list films followed by the name of the director.

Also, I am so taken with the performance of Maria Casares in Les Dames du Bois de Boulogne .  Best known as Death in Cocteau’s Orpheus and the unloved wife in Les Enfants du Paradis, she has one of the most impressive faces in cinema and was a hell of an actress.

2-  By watching Yoyo, I completed watching all the films in the wonderful Criterion box set of the complete films of Pierre Etaix.  A genius, ladies and gentlemen, descended from the line of Buster Keaton and Jacques Tati.  I hope to write a Have You Tried….  post about him soon.  But don’t wait for that! Untold delights await you from this comic master!

3- Some artists go from strength to strength as they age,  leaving us undeniable masterpieces at the end of their lives. Otello and Falstaff by Verdi, Parsifal by Wagner, The Dead by John Huston are examples of this.  But there are other genius who seem to fizzle out at the end of their creative life. It is hard to see how the director of Psycho and The Birds would have been content with Topaze. I was thinking about this watching Akira Kurosawa’s  Rhapsody in August.  This film comes shortly after his majestic epics Kagemusha and Ran, and compared to those mighty cinematic brothers, this film is little more that poorly executed cinematic claptrap. The platitudes about the affects of Hiroshima and Nagasaki on the Japanese and America survivors some 40 years after the fact, are cringe-worthy.  The whole thing is  inept and  annoyingly sentimental. I really wanted to strangle that gaggle of a kids.

All that I have left to watch of the Kurosawa oeuvre is Madadayo, which, from its description, sounds like a bad Japanese version of Goodbye, Mr. Chips. I am nervous.

4- In the introduction to The Adventures of Huckleberry Finn Mark Twain writes:

‘In this book a number of dialects are used, to wit:  the Missouri negro dialect; the extremest form of the backwoods Southwestern dialect; the ordinary “Pike County” dialect; and four modified varieties of this last. The shadings have not been done in a haphazard fashion, or by guesswork; but painstakingly, and with the trustworthy guidance and support of personal familiarity with these several forms of speech.

I make this explanation for the reason that without it many readers would suppose that all these characters were trying to talk alike and not succeeding.

Ladies and gentlemen, I give you The Golden Coach by Jean Renoir. I have no idea why the decision was made to have everyone in the film speak English, but because of this, the film often devolves into an incomprehensible Babel.  Even Anna Magnani, the voracious star of the film, lapses into streams of Italian swearing from time to time and she seems much relieved.