1- If you are looking for a film that features Cary Grant as well as a dancing caterpillar, then Once Upon A Time is the film for you!

2- Can someone please explain the genius of Max Ophüls to me?  I find his legendary moving camera distracting. I find his films dull. I’ll keep trying but I would certainly appreciate a little help here. Le Plaisir flowed better than most of his films I have seen, but for me they are deadly – mostly because they seem to be wearing ‘high art’ on their sleeves and that is never a good thing.

3- This time around I caught up with some films that I have been trying to get to for years.  I always dodged Sergeant Rutledge because, for some reason, I figured late John Ford would be stodgy John Ford. I should have known better. It is a stirring film. Its dealing with race issues is surprisingly frank and at the same time matter-of-fact.  Quite unusual for a film from 1960 where race was either ignored or served with a sledge-hammer. Ford turns Woody Strode into an icon of virtue to rival what he does with John Wayne. Plus you get to see Billie Burke! 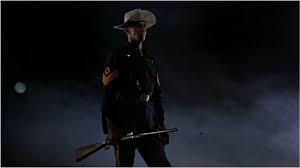 How did I miss Alice Doesn’t Live Here Anymore? What a rich script, with dense, surprising characters. It doesn’t have the taint that so many landmark films of the 70s have.  By way of contrast, The Conversation reeks with that taint.  The paranoia, the smarminess, the ugly mise-en-scene, the nihilistic characters – it has them all.  It is indeed brilliant, but I think once was enough for me.

4- All That Heaven Allows  – pure genius

5- Bad Day At Black Rock was recently shown on TCM as part of a Westerns festival.  That was pretty brilliant programming since it is truly a western disguised as a contemporary drama. Good guy rides into town and frees it from the corrupt and sadistic thrall of the bad guy. Plus it features a one-armed Spencer Tracy which makes it required viewing

1. The Godfather  films are examples of the laws of diminishing returns.  The first part remains perhaps the greatest example of narrative cinema I can think of.  The characters, the plot, the endlessly quotable script, the baroque performances of Brando and Pacino, the heartbreakingly simple performances of Diane Keaton and John Cazale, all just get better with time and with each viewing. Godfather II is cut from the same cloth, made in almost the same period as the first film and has most of the greatness of first part. By the time Godfather III rolls around we are in a different world.  Everyone is older, tireder and that includes the script. I watched all three recently with friends who had not seen any of the films so they did not live through the long wait between Godfather II and Godfather III. During those 16 years or so, the first two films acquired the patina of classics. We were all nervous that the lily would be gilded with Godfather III. We were right.  However, seeing it again twenty-five years later, it’s not so bad. But that is about the best that can be said for it.  Poor movie, trying to get a foothold next to the first two parts!

2. This Sacha Guitry is amazingly entertaining. The Pearls of the Crown was a pure delight.

3. Had there been no Cabaret, there would be no Chicago.  Good thing there was Cabaret, because Chicago is pretty swell

5. See my earlier post concerning The Warped Ones and other teenage rebellion films.  As Maurice Chevalier sings in Gigi, I’m so glad that I’m not young anymore!

6. There is a cottage industry in film criticism which goes back to cheesy horror films of the fifties to extrapolate some sort of social critique of the time. I supposed somewhere you can find a good feminist critique of The Attack of the 50 Foot Woman, explaining how it is the depiction of man’s greatest fear: women’s righteous anger being unleashed on souls of reprobate men.  Too bad the movie is so awful.

7. Mike Leigh.  I love you, Mike Leigh.  You are as great a genius as any of the geniuses you portray. Mr. Turner is dazzling, rich, hypnotic, cathartic, brilliant.  I remember when Topsy-Turvy came out.  I hadn’t seen it yet and I asked my friend Mike how he liked it.  His reply was, ‘I just want to know how it ever got made!’  Yes, a three-hour, big-budget film about the making of The Mikado.  How indeed. I now ask the same question about Mr. Turner. A two-and-a-half hour film on the life of a noted 19th century British seascape painter? How did it ever get made.  All I can say is that we all need to light a candle in thanks to the cinematic gods that is did get made. It is just magnificent.

8. I worry that Horton Foote will be forgotten.  He is the greatest playwright America has produced.  His works grow with the years. Get out of here, Eugene O’Neill.  Get out of here, Tennessee Williams.  Horton Foote is America’s Chekhov, albeit a Chekhov with an all-encompassing love for his characters and the West Texas world they live in. Please don’t let him slip away!

1- It was good finally to see Repulsion after only knowing it from a comic reference in Absolutely Fabulous over 20 years ago.  What a powerful and, yes, repulsive film it is. I think it would make an excellent double bill with Psycho since they both are about very attractive and sympathetic young people who are capable of awful things.  An interesting comparison between the two is that Hitchcock has Simon Oakland in the finale, giving a very pat explanation of what made Norman Bates do what he did – an explanation that I always assumed Hitchcock meant ironically.  In Repulsion, the attempts at explanation are oblique. What is important is the claustrophobic atmosphere created and the complicity we feel with the Deneuve character.   This film and two later Polanski films, Rosemary’s Baby and The Tenant, make a loosely connected ‘trilogy of paranoia’.

2- The piece I wrote a little while ago about Heroes For Sale could just as easily have been written about Wild Boys of The Road. Both were directed by William Wellman in 1933 and have a ripped-from-today’s-headline feel about them.  There is more of a feel-good end in Wild Boys Of The Road, without which the filn would have been unbearably hopeless.  A fascinating film.

3- TCM recently showed a few installations of a series of films from the 1940s based on The Whistler, a popular radio mystery show of the time. These are tight little programmers of little more than an hour in length, with tight little plots, often starring Richard Dix, of Ghost Ship in different roles in each episode.  Beside the entertainment value of these little gems, I enjoyed seeing how popular cultural phenomena was capitalized back then by Hollywood much in the way that it does today with TV spin-offs and super-hero epics.  Several of the installments were directed by William Castle in his pre-Schlockmeister days, which only adds to the fun

4- At about 70 minutes in length, Sing and Like It  has more laugh-out-loud lines than just about any film I can think of.  And what a treat to see Pert Kelton, Marian the Librarian’s Irish mother, as a pre-code saucy dame.  Priceless

5- I would like to write something cogent about Birdman, but I fear that will have to wait for subsequent viewings.  I will say that it amazed me.  It really seems to point to something new.  I just can’t put my finger on what yet.

6- La Silence de la Mer is a film of magnificent restraint and power from Jean-Pierre Melville. I need to see more of his stuff. This, and Les Enfants Terribles blew me away.

7- Ah, The Godfather.  All I will say is that it is even better than you remember it.  Sitting down and actually watching it instead of seeing clips makes you realize what a highly polished work of art it is.  At once Shakespearean and pulpy, there is nothing like it. And don’t say that there is anything like it……because it insults my intelligence.