The most discussed film of the past year must be Terrence Malick’s The Tree Of Life. There was never any doubt that the film would be devoured by cineastes. Malick is a famously reclusive director who surfaces after long periods of silence with films of great beauty. Film lovers have ecstatic memories of their first viewing of his Days of Heaven (1978). With only five feature films in thirty-eight years, expectations for The Tree of Life were understandably high. 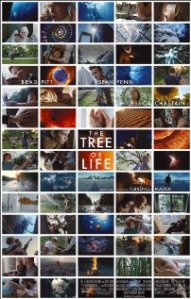 The film is stunning to look at, but quite cagey in its intentions. Just what is it doing? It seems to be concerned with depicting the life of a young family in Waco, Texas in the early 1950s. Their lives are presented in an impressionistic fashion. We don’t get their story, rather we get the shape of their story. The film also attempts to put this very specific place and time in the context of the birth and death of the whole universe. A curious interlude with dinosaurs may echo tensions between the main character and his father. Scenes of the birth of planets contrasts with a highly stylized sequence at the end of the film where all the characters appear to be meeting beyond death in the shallow waters of a barren lake bed. Blissful scenes of summer evenings of childhood contrast with angst-ridden scenes in modern-day Houston’s barren office buildings. The angst is never clearly articulated although it is effectively presented, just as the beauty of those summer nights is only evoked.

I left the theater dissatisfied. Subsequent attempts to get at the core of the film didn’t yield much either. It is discussed in hushed, reverent tones and attempts to pin down its meaning are often dismissed as shallow efforts of a philistine.
The Tree Of Life left my consciousness quickly after seeing it. It wasn’t until I recently watched John Ford’s She Wore A Yellow Ribbon (1949) again that I began to re-engage with it. I was able to come to a better understanding of it through the lens of that Western.
She Wore A Yellow Ribbon is the second in a loosely connected series of films often referred to as John Ford’s ‘Cavalry Trilogy’. It follows Fort Apache (1948) and precedes Rio Grande (1950). The films are only connected in that they depict cavalry life on the frontier right after the Civil War. Curiously, the characters played by Ben Johnson and Victor McGlaglen have the same names even though they are not playing the same people from film to film.
The film takes place in a very specific time. The voice-over introducing the film informs us that Custer has just been killed, which places us in late 1876. The Indian Wars seem to be winding down, but there are still pockets of resistance from tribes fighting the encroachment of the white man on ancestral lands. The Civil War also casts a long shadow over the events of the film. Sgt. Tyree (Ben Johnson) constantly reminds us that he is a son of the confederacy and states that the letter of honor that Capt. Brittles receives at his retirement would be even more meaningful if it contained Robert E. Lee’s signature along with Grant, Sherman and the others. The officer killed at Sudros Wells lies in state under the Stars and Bars.

This anchoring of the film into this specific era is done with a plethora of details of the time. The minute detailing of daily life, a hallmark of Ford films, is evident here in the depiction of life at Fort Starke. We go with the soldiers to the genearl store that doubles as a bar. Young officers and their girls go, or at least attempt to go on picnics. Friendships, rivalries and camaraderie among the soldiers is fleshed out by small, almost off-handed detail. Though unessential to the plot, dances, scouting parties and troop exercises give a great feel for life in that place at that time.
This very attention to detail has the dual effect of solidly locating the action in a time and place, but it also expands the everyday aspect of the film into the epic and timeless. Consider how She Wore A Yellow Ribbon depicts the whole spectrum of love and marriage:
a -The trajectory of the flirtation between Olivia Dandridge and Lts. Cohill and Pennell points  to an inevitable marriage just beyond the end of the film. Here we see the budding romance ending in almost fairy-tale like coupling.
b- The mature relationship between Col. Allshard and his wife Abby, affectionately referred to as ‘Old Ironpants’, shows the quiet understanding and wordless communication that only comes after years of being together. They represent the high point of relationships.c- As Olivia and her beaux show us the beginnings of love and marriage, the poignant visits of  Capt. Brittles to the grave of his wife depict the relationship that exists even after death.

The way that the various stages of military service are shown in the film also lifts it out of a particular time and place. The whole notion of ‘career’ is laid out before us.
a- She Wore A Yellow Ribbon begins with a clear statement that Nathan Brittles along with Sgt. Quincannon are soon to retire from active service. This is another of the trajectories that create the framework of the film. Brittles and Quincannon are career soldiers on the brink of the unknown. What will they do once they leave the cavalry? They look ridiculous in the suit of civilian clothes they both try on. Brittles talks off-handedly about going west, perhaps to California, but going west means going into the setting sun, and the setting sun metaphorically means one thing only.
b- But with then end of the career of these two hardened soldiers, the career of two green cadets on  the rise. Cohill is poised to take the reins of command from Brittles. We are anxious about his inexperience and callowness, but as the commander says, everyone must make their first run cross the river under gunfire. He will gain his experience just like Brittles did.
c- The counterbalance to these two is Sgt. Tyree. He is a seasoned soldier at the height of his career.  He, too, will be at the fort after Brittles has gone, but he will be gone long before Cohill retires.

The sense of epic is taken a step further with the hint of a past history, of things that happened before the story begins. This is so beautifully depicted in the scene at the camp of Chief Pony-That-Walks. Ford creates a sense of tension and fear that the situation could explode into violence. We are afraid because even the usually cool and collected Sgt.Tyree is visibly nervous. However, Brittle strides into the camp. What gives him the confidence? We soon see that he has an almost brotherly relationship with Pony-That-Walks. They are both relics of a time when Indians and white men, while not exactly friends, at least respected each other. They can speak each others’ languages. They have smoked the peace pipe together.
The tragedy is that it is too late for peace. Our glimpse of Brittles and Pony-That-Walks as leaders of their respective men, is but a shadow of what they now are. Their civilized friendship is swept aside by the zeal of a new generation bent on the annihilation of the other side. Even though it is not shown, we know the history of these two men. By being able to sense what they were, we leave the ‘present’ time of the film and are aware of history rushing past them.